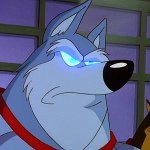 Chance Furlong (alias: T-Bone) (voiced by Charlie Adler) - The larger member of the SWAT Kats and pilot of the Turbokat jet. T-Bone is one of the best pilots in the SWAT Kat universe, as seen in "Cry Turmoil." He loves aerial warfare history as seen in "The Ghost Pilot" and Scaredy Kat cartoons. It was revealed in "The Ci-Kat-A" that he had a strong dislike of bugs that he eventually overcame. In "Mutation City", it was revealed that he was unable to swim, though later in the episode, he learned, and rescued an unconscious Razor from drowning. He is very protective of his partner and the Turbokat and gets extremely upset if anything happens to either. Chance is also the more daring of the two—in his willingness to take chances (especially when in the TurboKat). Chance commonly flew the Turbokat out of tough situations, refusing to eject, and coaxing his "baby"—the TurboKat—to perform. Jake Clawson (alias: Razor) (voiced by Barry Gordon) - The smaller member of the SWAT Kats, who is a mechanical genius. He designed the various gadgets and advanced weaponry used in the Turbokat, and he serves as the radar interceptor and weapons control officer, or RIO, in the Turbokat. He is a martial arts master. He is the more measured, and restrained, of the two kats. In "Razor's Edge", he lost his self-confidence in his fighting because he had "hurt" two pedestrians, but recovered from this upon discovering it was a set-up by Dark Kat. He loved the late night show with David Litterbin (a pun on David Letterman). His catchphrase is "Bingo!" Dark Kat (voiced by Brock Peters) - Dark Kat was the main arch-enemy of the SWAT Kats. He is very large, intelligent and evil purple-skinned cat that wears a black and red hooded coat. Dark Kat wanted to destroy Megakat City to create a new lawless town called "Dark Kat City". Being highly intelligent and calculating, Dark Kat often anticipated his foes' actions with great accuracy, and it was a recurring theme throughout the series that all of his hideouts are rigged with explosives. He first appeared in "The Wrath of Dark Kat." His attempt to bomb the Enforcer headquarters indirectly led to Chance and Jake's employment termination from the Enforcers and the birth of the SWAT Kats. He was the only main villain who never got an origin story of his own in the series. However, some promotional material for the series depicted him as being a judge in Megakat City by day and he would use this to hide his criminal life. This was never referred to in show. Commander Ulysses Feral (voiced by Gary Owens) - Head of the Enforcers, Feral had a strong and obvious dislike for the SWAT Kats, whom he considered "reckless vigilantes." He had worked with the SWAT Kats when the situation called for it such as in "Katastrophe" and "A Bright and Shiny Future", but he more often called on his men saying "The Enforcers will handle this" and "Get me chopper back-up!" He is solely responsible for the birth of the SWAT Kats. When Chance and Jake were once Enforcers, they were kicked out of the force for their disobedience during an aerial assault against Dark Kat and forced to work at the city junk yard to paid off a hefty debt from the damage of Enforcer HQ....all of which Feral himself was also and mostly responsible for. He sees them as nothing more than "ruthless vigilantes", but is likely jealous because they made him and the Enforcers look very incompetent. He would go as far as to issue an "arrest on sight" if the duo would go too far. Despite his ego, he has a strict sense of justice and tries his best to battle the threats that plague Metrokat City. It is uncertain if he has any respects for SWAT Kats. When the Metallikats offered to reveal the identities of the SWAT Kats in exchange for their freedom, he rejected the offer quoting "I don't deal with scum." Calico "Callie" Briggs (voiced by Tress MacNeille) - The Deputy Mayor of Megakat City and the one who did the real work of City Hall. The SWAT Kats' biggest supporter, she had a radio communicator which enabled her to call them directly when danger threatened the city. Although she did not know who they were, Callie usually trusted her life to the SWAT Kats if required. In "The Dark Side of the SWAT Kats", her equivalent in a parallel universe was an evil ally of Dark Kat. In "Bride of the Pastmaster", her ancestor Queen Callista was leader of the medieval kingdom of "Megalith City." Though T-Bone had a crush on her, she had a crush on Razor (more evident in the fact that even her ancestor seemed to favor Razor over T-Bone), likewise, she also seemed to favor Jake and only saw Chance as a friend. Her name was a pun on Calico cat breed. Enforcers - The Enforcers are the militarized police force of Megakat City.

Retrieved from "https://sonicmovie.fandom.com/wiki/User:RioBaddie?oldid=16960"
Community content is available under CC-BY-SA unless otherwise noted.