Sunset Shimmer (voiced by Rebecca Shoichet) is a character from My Little Pony: Equestria Girls. She was once Princess Celestia who desired power. After disappearing for years, she returned to Equestria to steal Twilight's crown. At the end, Sunset was defeated, which led to her redemption.

In Equestria Girls: Rainbow Rocks, Sunset had reformed from her evil ways. She helps Twilight and her friends defeat the Dazzlings. 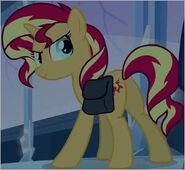 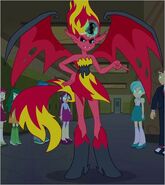 Add a photo to this gallery
Retrieved from "https://sonicmovie.fandom.com/wiki/Sunset_Shimmer?oldid=13330"
Community content is available under CC-BY-SA unless otherwise noted.