Sonus The Hedgehog is a Keyblade Master like Aqua. Sonus is also Darrienne's younger brother, Samantha's husband and Sonic and Julie's father.

Just like Sonic, Sonus is the same as his son. Expect he can be serious at times.

Sonus is an replica of Sonic, expect he wears a diferent pair of gloves and shoe. On one arm, there is some armor and a gaunlet on. Also he has a pair of sunglasses on his head.

Like Sonic, he is voiced by Roger Craig Smith.

The 1st Jinchuriki of Orochi

During the time, he was searching for Aqua, Sonus came acroos the world where Amaterasu orignatted from. Sonus and Shirauni battle Orochi, in order to stop him, Sonus uses his keyblade and seal Orochi in him.

After some time, Sonus manage to control Orochi, He manage to obtain why and how Orochi came to be. On another world, Sonus meet Naruto's parents beforre Naruto was born. Sonus had injures from Orochi's attempts to take over. Since Minato had Sonus's wounds, Sonus made a promise to help Minato out when he needs help.

After sealing the Nine-Tails in Naruto, Sonus and Minato were near-death; Sonus requested Minato if he could seal Orochi in his son, Sonic as a dying request in hopes that Sonic will be able to master the 8-headed Dragon in the future and if he could appear in Sonic's mind if he ever went up to 7-heads. 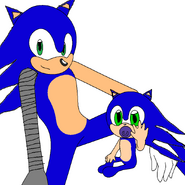 Add a photo to this gallery
Retrieved from "https://sonicmovie.fandom.com/wiki/Sonus_The_Hedgehog?oldid=17620"
Community content is available under CC-BY-SA unless otherwise noted.