Doctor Edward Richtofen is an antagonist in Call of Duty: World at War and Call of Duty: Black Ops. He was a Nazi scientist who developed the Wunderwaffe DG-2 and loved to torture various victims of his. He has appeared canonically in Ascension, Kino der Toten, Shangri La, Moon, Shi No Numa, and Der Riese and in an easter egg of Call of the Dead, and non-canonically in Nacht der Untoten, and Verrückt. He replaced Samantha Maxis as the demonic announcer in Moon, after completing the Easter Egg, which has continued throughout Black Ops II Nazi Zombies until Buried, when Dr. Ludvig Maxis replaces him as the Demonic Announcer if the player completes his side of the main easter egg.

"Beware The Doc". A message that was scrawled across walls of every town under Axis control. Starvation may cripple you, dysentery may wreck you, and gunfire may rip the flesh from your bones, but "Beware The Doc".

This is Dr. Richtofen, known affectionately as "The Butcher" to his victims as they scream in agony moments before he snuffs out their light. All through his career, Richtofen has been at the forefront of torture and information extraction research. Richtofen is an incurable sociopath and sees no moral distinction between natural death and murder; the victim is the victim, regardless of how their demise manifests itself.

Doctor Richtofen has a collection of stuffed animals, most of them posed in positions of terror at the instant of their death."

He is the creator of the Hellhounds, the Wunderwaffe DG-2, and the culprit behind Dr. Ludwig Maxis' and Samantha Maxis' disappearance. After all of the testing radios are found on Der Riese, the final radio replays the moment when Richtofen locked Dr. Maxis and his daughter, Samantha, in a teleporter with a Hellhound. His final words before the recording stopped were, "Goodbye, Doctor Maxis." Richtofen also has several remarks in Der Riese that reinforce this image. For instance, whenever he finds a teleporter, he will sometimes remark, "Good, it is still here...I mean, uh, ooh, what could this be?" He obviously wants to keep his involvement in the matter a secret from his colleagues.

Treyarch has confirmed that Edward, Dr. Maxis assistant, is indeed Richtofen and that Richtofen is responsible for the disappearance of Samantha and Dr. Maxis.

In the final map pack for the first Black Ops, Rezurrection, on the moon, Samantha's body may be accessed through using a key to activate it. If you blow up the earth, Richtofen switches souls with Samantha and her body is released in a shrine. If playing as Richtofen you can converse with Dr. Maxis via a computer. They talk about how they worked together on the DG-2 and how they were meant to change the human condition.

He once again makes an appearance in Black Ops II, where he is mostly heard as the Demonic Announcer in TranZit, Die Rise and then Buried. In each of the three maps, he speaks to a survivor named Samuel Stuhlinger, who he enlists to help him polarise three towers in order to reinforce his link between the Aether and Earth. If all towers are powered in his favour, Richtofen destroys Maxis' soul and then shares Samuel's body. But if the player chooses to follow Maxis instead, he becomes the Demonic Announcer, replacing Richtofen, and begins the process of destroying the earth in order to reach Agartha to reunite with Samantha. In the meantime, Maxis banishes Richtofen's soul from the Aether and he is to be condemned to eternal damnation as a zombie. This is considered the canonical ending.

In the final map for Black Ops II, named Apocalypse, an alternate version of Richtofen appears as a playable character, alongside younger, alternate versions of Tank Dempsey, Nikolai Belinski and Takeo Masaki, since the map is where all four character meet for the first time in the Origins Timeline. Eventually the group frees Samantha from Agartha and she reunites with Maxis. Two years after Origins Richtofen learns of another universe where he is a child playing a casual game of zombies with Samantha Maxis and he is an innocent child. Wanting to protect this version of himself and Samantha, Origins Richtofen goes to multiple dimensions and kills all of his incarnations. The other three attempt to stop him but ultimately fail. Eventually Richtofen stops in one particular realm in order to take the Summoning Key to set a universe right, he thanks the Shadows of Evil cast for the key before leaving through a portal, leaving the four for dead. Following this, the Origins Timeline Richtofen ends up in a slighlty altered version of the original timeline, only a minute after his original self attempted to murder Maxis and Samantha. Dempsey, Nikolai and Takeo from Origins attempt to warn the original Richtofen to not open a teleporter but he ignores them and finds his alternate self. Origins Richtofen looks at his Original Timeline version with disgust and disappointment when being greeted by his other self who took off his Nazi Officer hat to greet him. Unexpectedly, the original Richtofen was shot dead by his Origins version which ended up changing future events and caused moon to never have occurred in that particular timeline. 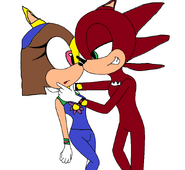 Add a photo to this gallery

Retrieved from "https://sonicmovie.fandom.com/wiki/Jordan_the_Hedgehog?oldid=17818"
Community content is available under CC-BY-SA unless otherwise noted.