Start a Wiki
Bulk Biceps is a white pegasus pony with a blonde mane. He is easily distinguished by his thick musculature, tiny wings and generally loud and enthusiastic demeanor. In spite of his somewhat intimidating appearance, some more sensitive aspects of his personality seep through on occasion. In the episodes "Hurricane Fluttershy" and "Wonderbolts Academy", his emphatic "YEAH"'s are provided by the show's supervising director Jayson Thiessen. In his full-fledged speaking appearance in "Rainbow Falls", he is voiced by Michael Dobson.

In Equestria Girls: Rainbow Rocks, the human version of Bulk Biceps is seen in the gym when Principal Celestia and Vice Principal Luna are on stage. He also participates in The Mane Event playing the violin. He is also seen fighting with Derpy while Lyra Heartstrings and Sweetie Drops restrain her. During the ending credits, he helps lift up Sunset Shimmer so she can reach Angel on a hard-to-reach perch. 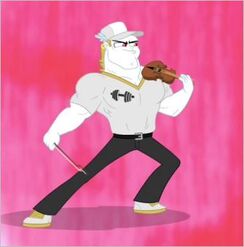 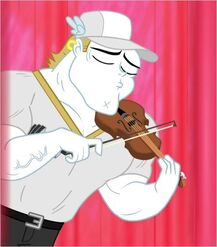 Add a photo to this gallery
Retrieved from "https://sonicmovie.fandom.com/wiki/Bulk_Biceps?oldid=13362"
Community content is available under CC-BY-SA unless otherwise noted.